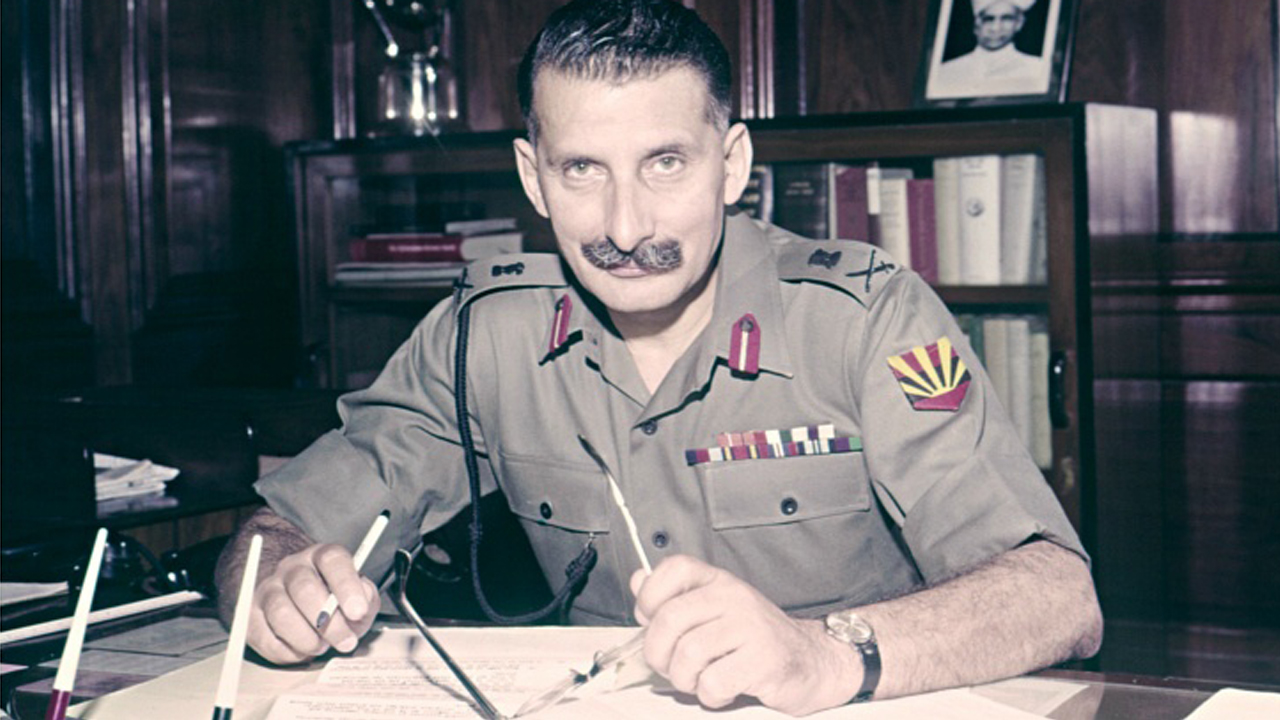 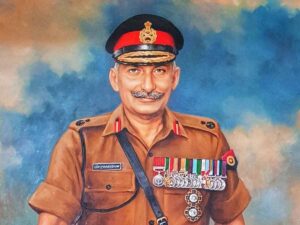 They point to Germany and to Japan who fought a war for four and a half years- whose youth was decimated and industry was destroyed. They were occupied, and they had to pay reparations; Look at the progress those countries have made. The youngsters want an answer. So, Ladies and Gentlemen, I thought I should give you the answer.

The problem with us is the lack of leadership. Commandant, Ladies and Gentlemen, do not misunderstand me when I say lack of political leadership. I do not mean just political leadership. Of course, there is a lack of leadership, but also there is a lack of leadership in every walk of life, whether it is political, administrative, in our educational institutions, or whether it is our sports organizations. Wherever you look, there is lack of leadership. I do not know whether leaders are born or made. There is a school of thought that thinks that thinks that leaders are born. Ladies and Gentlemen, we have a population of 960 million people and we procreate at the rate of 17 million-equaling the total population of Australia-each year, and yet there is a dearth of leadership. So, those of you who still contribute to the fact that leaders are born, may I suggest you throw away your family planning, throw away the pill, throw away any inhibiting factor and make it free for all. Then perhaps someday a leader may be born.

So, if leaders are not born, can leaders be made? My answer is yes. Give me a man or a woman with a common sense and decency, and I can make a leader out of him or her. That is the subject which I am going to discuss with you this morning.

You have to keep at it, and at it, and at it. Can those of our political masters who are responsible for the security and defence of this country cross their hearts and say they have ever read a book on military history, strategy, on weapons developments. Can they distinguish a mortar from a motor, a gun from a howitzer, a guerrilla from a gorilla, though a vast majority of them resemble the latter?

Ladies and Gentlemen, professional knowledge and professional competence are a sine qua non of leadership. Unless you know what you are talking about, unless you understand your profession, you can never be a leader. Now some of you must be wondering why the Field Marshal is saying this, every time you go round somewhere, you see one of our leaders walking around, roads being blocked, transport being provided for them. Those ladies and gentlemen are not leaders. They are just men and women going about disguised as leaders – and they ought to be ashamed of themselves! What is the next thing you need for leadership? It is the ability to make up your mind to make a decision and accept full responsibility for that decision. Have you ever wondered why people do not make a decision? The answer is quite simple. It is because they lack professional competence, or they are worried that their decision may be wrong and they will have to carry the can. Ladies and Gentlemen, according to the law of averages, if you take ten decisions, five ought to be right. If you have professional knowledge and professional competence, nine will be right, and the one that might not be correct will probably be put right by a subordinate officer or a colleague. But if you do not take a decision, you are doing something wrong. An act of omission is much worse than an act of commission. An act of commission can be put right. An act of omission cannot. Take the example of the time when the Babri Masjid was about to be destroyed. If the Prime Minister, at that stage, had taken a decision to stop it, a whole community – 180 million would not have been harmed. But, because he did not take a decision, you have at least 180 million people in this country alone who do not like us.

When I was the Army Chief, I would go along to a formation, ask the fellow what have you done about this and I normally got an answer, “Sir, I have been thinking… I have not yet made up my mind,” and I coined a Manekshawism. If the girls will excuse my language, it was ‘if you must be a bloody fool – be one quickly’. So remember that you are the ones who are going to be the future senior staff officers, the future commanders. Make a decision and having made it, accept full responsibility for it. Do not pass it on to a colleague or subordinate.

So, what comes next for leadership? Absolute Honesty, fairness and justice – we are dealing with people. Those of us who have had the good fortune of commanding hundreds and thousands of men know this. No man likes to be punished, and yet a man will accept punishment stoically if he knows that the punishment meted out to him will be identical to the punishment meted out to another person who has some Godfather somewhere. This is very, very important. No man likes to be superceded, and yet men will accept supercession if they know that they are being superceded, under the rules, by somebody who is better than they are but not just somebody who happens to be related to the Commandant of the staff college or to a Cabinet Minister or by the Field Marshal’s wife’s current boyfriend. This is extremely important, Ladies and Gentlemen.

Ladies and Gentlemen, I do not know which of these is more important. When I am talking to young officers and young soldiers, I should place emphasis on physical courage. But since I am talking to this gathering, I will lay emphasis on Moral Courage. What is moral courage? Moral courage is the ability to distinguish right from wrong and having done so, say so when asked, irrespective of what your superiors might think or what your colleagues or your subordinates might want. A ‘yes man’ is a dangerous man. He may rise very high, he might even become the Managing Director of a company. He may do anything but he can never make a leader because he will be used by his superiors, disliked by his colleagues and despised by his subordinates. So shallow– the ‘yes man.’

I am going to illustrate from my own life an example of moral courage. In 1971, when Pakistan clamped down on its province, East Pakistan, hundreds and thousands of refugees started pouring into India. The Prime Minister, Mrs. Gandhi had a cabinet meeting at ten o’clock in the morning. The following attended: the Foreign Minister, Sardar Swaran Singh, the Defence Minister, Mr. Jagjivan Ram, the Agriculture Minister, Mr. Fakhruddin Ali Ahmed, the Finance Minister, Mr. Yashwant Rao, and I was also ordered to be present.

Ladies and Gentlemen, there is a very thin line between becoming a Field Marshal and being dismissed. A very angry Prime Minister read out messages from Chief Ministers of West Bengal, Assam and Tripura. All of them saying that hundreds of thousands of refugees had poured into their states and they did not know what to do. So the Prime Minister turned round to me and said: “I want you to do something”.

She said, “I want you to enter East Pakistan”.

I said, “Do you know that that means War?”

I, in my usual stupid way said, “Prime Minister, have you read the Bible?”And the Foreign Minister, Sardar Swaran Singh (a Punjabi Sikh), in his Punjabi accent said, “What has Bible got to do with this?”, and I said, “the first book, the first chapter, the first paragraph, the first sentence, God said, ‘let there be light’’ and there was light. You turn this round and say ‘let there be war’ and there will be war. What do you think? Are you ready for a war? Let me tell you –“it’s 28th April, the Himalayan passes are opening now, and if the Chinese gave us an ultimatum, I will have to fight on two fronts”.

Again Sardar Swaran Singh turned round and in his Punjabi English said, “Will China give ultimatum?”

I said, “You are the Foreign Minister. You tell me”.

I turned to the Agriculture Minister, Mr. Fakhruddin Ali Ahmed, “If there is a famine in the country afterwards, it will be you to blame, not me.” Then I said, “My Armoured Division has only got thirteen tanks which are functioning.”

The Finance Minister, Mr. Chawan, a friend of mine, said, “Sam, why only thirteen?”

“Because you are the Finance Minister. I have been asking for money for the last year and a half, and you keep saying there is no money. That is why.” Then I turned to the Prime Minister and said, “Prime Minister, it is the end of April. By the time I am ready to operate, the monsoon will have broken in that East Pakistan area. When it rains, it does not just rain, it pours. Rivers become like oceans. If you stand on one bank, you cannot see the other and the whole countryside is flooded. My movement will be confined to roads, the Air Force will not be able to support me, and, if you wish me to enter East Pakistan, I guarantee you a hundred percent defeat.”

“You are the Government”, I said turning to the Prime Minister, “Now will you give me your orders?”

Ladies and Gentlemen, I have seldom seen a woman so angry, and I am including my wife in that. She was red in the face and I said, “Let us see what happens”. She turned round and said, “The cabinet will meet four o’clock in the evening”.

Everyone walked out. I being the junior most man was the last to leave. As I was leaving, she said, “Chief, please will you stay behind?” I looked at her. I said, “Prime Minister before you open your mouth, would you like me to send in my resignation on grounds of health, mental or physical?”

“No, sit down, Sam. Was everything you told me the truth?”