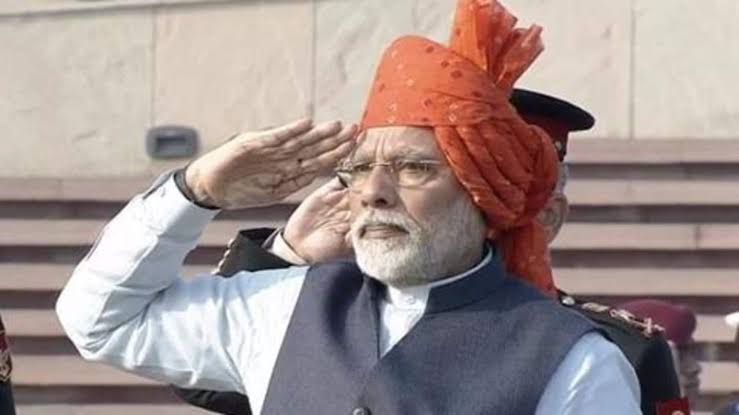 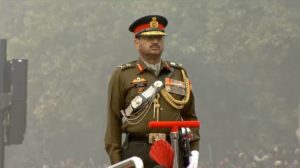 The Republic Day parade began at 10:00 am with the national salute, which lasted for around 90 minutes and included a flypast by MI-17 and Rudra armed helicopters, display of latest weapons and equipments and sixteen marching contingents from the Armed Forces, Para-Military Forces, Delhi Police, National Cadet Corps (NCC), National Service Scheme (NSS) and thirteen Military bands. 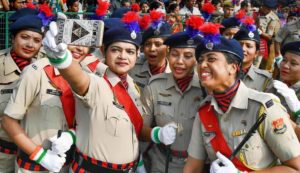 As many as 22 tableaus of various states, union territories and government departments also moved past India Gate, followed by cultural items by school children and motorcycle display by an all-women team of Central Reserve Police Force (CRPF). 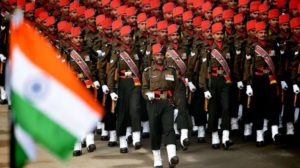 The first contingent in the uniform was of the erstwhile Gwalior Lancers, 61 Cavalry led by Captain Deepanshu Sheoran.

Behind it was the first column in the Mechanised Columns — the Main Battle Tank of the Indian Army, T- 90 Bhishma, commanded by Captain Sunny Chahar of 86 Armoured Regiment. 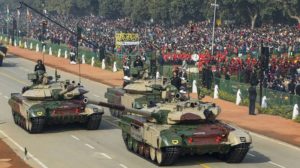 The next detachment was of the Infantry Combat Vehicle (ICV) BMP-II led by Lieutenant Vijay Pal Singh Sra of the 18th Battalion, The Mechanised Infantry Regiment. BMP is a high mobility Infantry combat Vehicle with potent armament and state of the art night fighting capability.

Thereafter, the next detachment was K-9 VAJRA-T commanded by Captain Abhinav Sahu of 269 Medium Regiment.

Following it was the next detachment of Dhanush Gun System commanded by Captain Mrigank Bhardwaj of 93 field regiment. The 155mm/45 Caliber Dhanush Gun System is a towed Howitzer which has been designed indigenously by the Ordnance Factory Board. 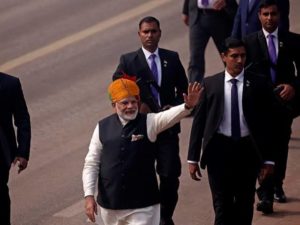 The next detachment was of Transportable Satellite Terminal (TST). The TST vehicles of the Corps of Signals was led by Major Sheena Nayyar of the 21 Signal Group, followed by Akash weapon system commanded by Major Ankit Pahil and Captain Satyanaryana Madimi of 128 Air Defence Missile Regiment.

And then came the marching contingents — the first being the gallant Paratroopers of The Parachute Regiment. The contingent was led by Major Nikhil Kumar Maurya and was assisted by Major Tarun Rathi. 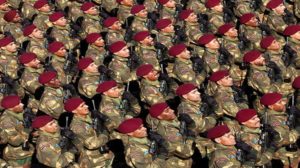 This was followed by a contingent of The Grenadiers Regiment, the Sikh Light Infantry, Kumaon Regiment.

The next marching contingent was of the Corps of Signals which was led by Captain Tanya Shergil, a fourth-generation Army Officer. 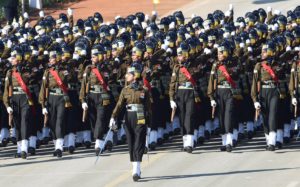 The Naval tableau showcased the might and firepower of Navy in all three dimensions viz surface, sub-surface and air.

The Indian Air Force tableau showcased scaled-down models of the Rafale aircraft, the Tejas aircraft, the Light Combat Helicopter, the Akash Missiles System, and the Astra Missiles against a sky blue background. The smartly attired officers in their flying overalls stand alongside the models. 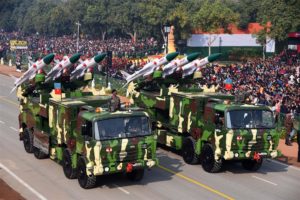 This was followed by contingents of para-military (Coast Guard, CRPF, ITBP, CISF) and other auxiliary civil forces.

And shortly after this came, the tableaus of several states showcasing their traditions and culture truly representing India’s diversity.

The tableau of Chhattisgarh showcased the artistic beauty of state’s folklife, while the tableau of the state of Tamil Nadu showcases the Folk Arts (Gramiya Kalai) of the Tamil people. 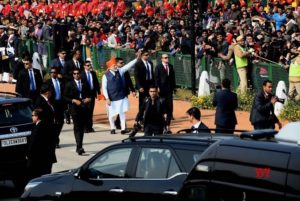 The tableau of Rajasthan depicted the architectural and cultural heritage of Jaipur while that of Himachal Pradesh showcased the fervour and festivity of world-famous International Kullu Dussehra festival.

The tableau of Odisha state showcased the famous Rukuna Ratha Yatra of Lord Lingaraja, while the tableau of Gujarat depicted the theme of ‘Rani Ki Vav-JalMandir’ representing the state’s art heritage.

The tableau of Uttar Pradesh mirrored not only the cultural and religious tourism of the state but also the state’s theme of “Sarva Dharma Samabhav” and the tableau of Punjab showcased the ideology of Sahib Sri Guru Nanak Dev. 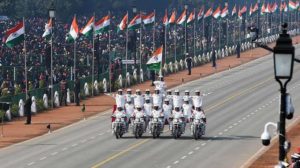 The tableau of Department of Financial Services, Ministry of Finance depicts the wonderful achievements made in the area of financial inclusion in the country and that of Ministry of Jal Shakti underlined the Government’s new initiative ‘Jal Jeevan Mission’ which aims at providing Functional Household Tap Connection to every rural household by 2024 – Har Ghar Jal.

Thereafter came on a decorated jeep, the 49 children including 18 girls and 31 boys who have been honoured with the Pradhan Mantri Rashtriya Bal Puruskar, 2020 for their exceptional achievement.

The CRPF woman bikers showed their “dare-devilry” on Rajpath. Leading the Dare Devils in today’s Parade was their dynamic leader, Inspector Seema Nag, who was seen saluting smartly while standing atop a moving motorcycle. 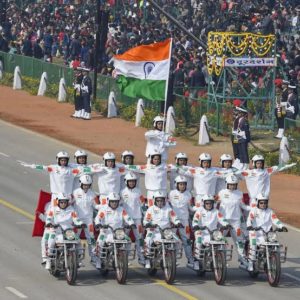 And then began the finale – the fly-past. 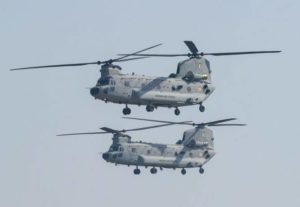 Behind the ‘Netra’ formation was the ‘Globe’ formation, comprising three C-17 Globemaster flying in displaced trail Vic formation at a speed of 500 kmph. Five Jaguar Deep penetration strike aircraft, in ‘Arrowhead’ formation were the next to fly past at a height of 300 m and a speed of 780 kmph.

Following the Jaguars were five MiG-29 Upgrade Air Superiority Fighters in ‘Arrowhead’ formation. Then three Su-30 MKIs of the Indian Air Force executed the Trishul manoeuvre in front of you. The parade culminated with a lone Su-30 MKI flying at a speed of 900 km/hr split the sky with a ‘Vertical Charlie’. 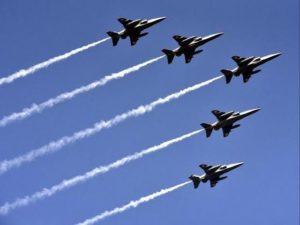 Following this, The President’s Bodyguards arrived to escort the Supreme Commander of the Armed Forces, the President of India Ram Nath Kovind. 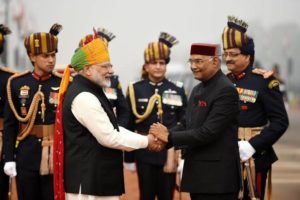 President of India Ram Nath Kovind and President of Brazil Jair Bolsonaro, who was the Chief Guest, left after the parade concluded. 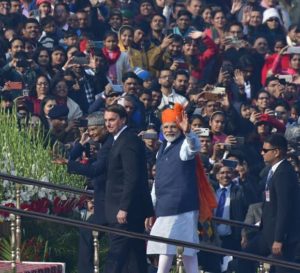 At the end of the parade, tricolour balloons were released. Prime Minister Narendra Modi greeted the crowd at Rajpath as the people cheered for him enthusiastically. 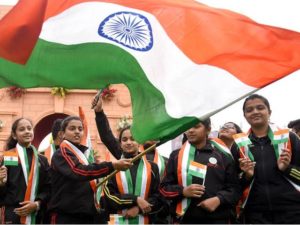