Finally, the Indian Army has killed most wanted Hizb Terrorist Riyaz Naikoo today (6th May 2020) afternoon in Jammu and Kashmir’s Pulwama district. He had been trapped in the Beighpora area of Awantipora in Jammu and Kashmir’s Pulwama district since Tuesday (5th May 2020) evening. The Beighpora encounter is the third operation that was launched after receiving specific inputs.

Top officials involved in the operation claim that after eliminating Naikoo, south Kashmir is almost free from terrorism.

Naikoo was eliminated in the hours-long operation carried out by the Indian Army, CRPF, and Jammu and Kashmir Police in the Beighpora area in Pulwama. At least two more terrorists were also killed by security forces in the encounter in the Sharshali Khrew area of Awantipora.

The operation started the late night on Tuesday after the forces got a tip-off about Naikoo hiding in the area. The security forces kept a larger base of “target” so that he couldn’t escape.

When the operation was about to end, Jammu and Kashmir Police asked all forces to stop convoy movements with immediate effect. The police said that all vehicles should be restricted across the Valley, adding that the movement of isolated vehicles should be avoided.

Cops also advised that the movement of Army and CRPF vehicles should not be allowed in the interiors, inter-district, and intra-district.

Naikoo had 12 lakh rupees bounty on his head and was in the hit list of security forces. He was the brain behind major terror activities in Jammu and Kashmir and was a high-value target for Indian forces after he took charge of Hizbul Mujahideen.

“Contact established in the third operation at Beighpor in Awantipur. The top terrorist commander is trapped. Exchange of fire on. Details shall follow,” Jammu and Kashmir Police had tweeted when operations were going on.

According to sources, Riyaz Naikoo was also involved in killings of jawans and planned attacks on security forces and was the successor of Zakir Musa, who was eliminated by security forces in May last year.

“He planned massive activities in Kashmir during Ramzan so that he can raise more terrorists from local villages. In a conversation, which was recorded by security forces, a terrorist had said that Naikoo will be doing some operations directly, which became the first tip-off of his location,” a senior intelligence officer told ANI.

Naikoo, a teacher by profession during his old days, was also famous for doing things on the ground as well as off ground.

According to a senior police officer of the Union Territory, Naikoo also planned anti-India campaigns after the abrogation of Article 370 from Jammu and Kashmir. “He used youths in spreading lies on social media to disturb law and order situation in the valley,” the source said.

Forces are claiming that after his death, Hizbul has no face or leader left in Jammu and Kashmir and it is unlikely to get a commander due to fraction after a new terror outfit, called The Resistance Front (TRF), was launched by Pakistan. 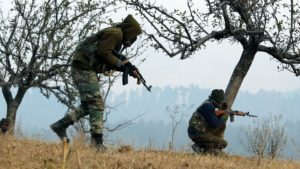 One of the longest surviving militants, Naikoo had joined Hizbul Mujahideen in May 2012 at the age of 27. Until then, Naikoo, a graduate from Beighpora village of south Kashmir’s Pulwama district, worked as a teacher at a private school and also ran a private tuition center.  In the 2010 summer uprising, Naikoo was arrested by security agencies for participating in pro-freedom protests. He was released in 2012. Unlike previous commanders of the Hizbul Mujahideen, such as Burhan Wani and Zakir Rashid Bhat, alias Zakir Musa, Naikoo kept a low profile. Well into his 20s when he took up arms, Naikoo was also older than the average militant in recent years. He went by the code name Mohammad Bin Qasim.

Soon after the killing of the poster boy and the commander of Hizbul Mujahideen, Burhan Wani in 2016 in Anantnag district, Riyaz Naikoo took over.

He carried a reward of Rs 12 lakh on his head and was marked as a topmost terrorist in the Ministry of Home Affairs’ most wanted list last year.

His name also figured in a hit list prepared which was prepared by the security forces in 2018.

He was known to have an interest in painting roses.

According to sources Naikoo is credited for holding the Hizbul together when Zakir Musa broke away from the ranks in order to form his own group.

In 2017, sources say that Musa had spilled from Hizbul and created his own group Ansar Ghazwatul Hind. This group had claimed itself to be the Indian affiliate of Al-Qaeda.

Musa was finally killed by the Indian security forces in an encounter in the Dadsara area in Tral Tehsil on May 23, 2019.

Three terrorists have been killed today in simultaneous three operations in Kashmir. In Awantipora, South Kashmir the top Hizbul Commander Naikoo is killed and identification drive is on.