The Thematic Apperception Test was first developed by Murray and his co-workers at the Harvard Psychological Clinic, having first been described by Morgan and Murray (1935). The term appreciation was chosen in view of the fact that subjects don’t just perceive, rather, they construct stories about the cards or rather say pictures in accordance with their personality characteristics and their experiences.

Generally, there are 31 pictures in the entire set, out of which 11 pictures are sufficient to lend a representative sample of the candidate as intended by the DIPR (Defence Institute of Psychological Research).

SSB Boards ordinarily use the male set of TAT pictures with men, and the female set of TAT pictures with women, because it is believed that on the TAT examinees identify more with stimulus characters of the same sex as themselves, and therefore produce more projective material when the stimulus figures match their own sex. And at last, candidates face one blank picture also which a very useful part of the process and the reason is behind using this picture is to be completely neutral, simple, and culture free.

Generally, psychologists instruct “ These pictures are completely different from each other. Write down complete stories based on each picture shown to you within the given time limit viz. what let to the situation, what is presently going on, and the final outcome by consisting of some actions too.” These clear instructions emphasize the similarity between the blank picture and the other pictures and remind the candidate to produce a story rather than a descriptive scene.

It is recommended that the blank picture be administered last, which highlights the special nature of the task. “ White responses,” such as “ a polar bear in the snow “, are considered rejections of the card, and may reflect hostility toward the examiner and the procedure.

Commonly used abbreviations the examiner may find helpful include:

Thematic Apperception Test (TAT) responses can be meaningfully interpreted because it is assumed that what an individual makes of an ambiguous stimulus, such as TAT pictures, reflects his or her own personality and characteristic modes of interacting with the environment. Subjects create TAT stories based on a combination of three things:

On the TAT, the degree of ambiguity of the stimulus varies from card to card, but each requires the individual to subjectively interpret the pictures and create a story, which involves borrowing on events from one’s own experiences, feelings, and conflicts.

Interpreting information obtained from a testing situation is ordinarily a useful way to obtain access to an individual’s psychological makeup because when the candidate is reacting to pictures, rather than real people and real social situations, he or she is under less pressure from conventionally and is more likely to depict his or her inner feelings.

In addition to the actual TAT stories, the candidate’s behaviour during testing also provides useful data, as behaviour during psychological assessment can be seen as a sample of more generalized behaviour. Interpretation involves discerning common factors underlying the various stories (both their content and form) and translating these themes into meaningful explanations of the Subject’s Personality.

Some sample TAT pictures are given below: 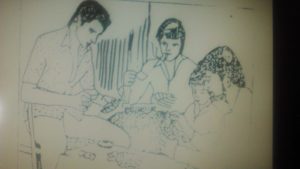 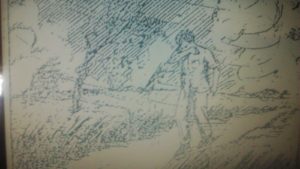